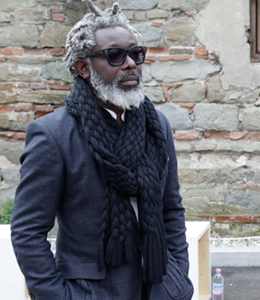 Scarf is one of the oldest accessories: the habit of wrapping a scarf around the neck and head exists since man discovered the processing techniques and texture of the fabric. Men’s fashion is not excluded from the use of warm men’s scarves, in wool or cashmere for cold days, stoles and shawls to adorn elegant coats, foulard and silk scarves as accessory to shirts, jackets, sweaters or knitted cardigans, not to mention the many types of men’s scarves with a more ornamental function, in lighter fabrics, greatly appreciated for some time now.

The use of the scarf in place of a tie is an interesting phenomenon for the fashion industry, as the modern long necktie, is a descendant of the neckerchief. The ancestor of the modern scarf is generally considered the “focal”, worn by Roman legionaries in Gaul and Germany to protect them from cold. As far as concerning the form and function of focals and modern shawls, one might ask whether it is appropriate to consider the first a prototype and not rather the culmination of previous models.

Apart from that, the scarf then has undergone no change: keep warm and protect us from the cold. Depending on the thickness, the shape and the processing of wool, it performs its function in a more or less effective way. Today, however, scarves serve a dual function: shelter from the cold but also add a style touch to men’s clothing and can be used all year round.

Despite the close similarity that exists between scarves and ties, the gentleman dress code bans the interchange. You can not wear a suit with a neckerchief, at least not if you aspire to have a business classic look. Instead, it is perfectly legitimate to wear a neckerchief with a sport coat or a suit in more formal occasions others than working environments.

A coarse knit scarf is considered to be rough, while a fine scarf is more elegant. The more informal is the occasion, the more course, thick and colourful scarves become. On the contrary, formal circumstances require refined cashmere, sometimes silk-lined scarves. There are also items in pure silk, which basically are only symbolic scarves and are much less warm than their sisters heavy weight wool scarves. The best balance between keeping warm and a refined appearance is represented by the cashmere scarf. As ties or handkerchief, men’s scarves are an accessory that make us stand out from the crowd, since it is a detail of accurate choice.

What type of scarf do you prefer?

Comment or write us to let us know your style preferences and tips!