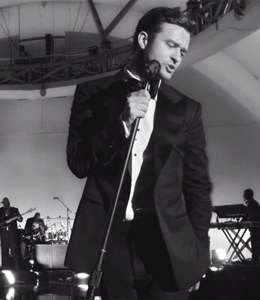 Justin Timberlake‘s total black and white outfit is truly eye-catching in the new music video for his latest single “Suit & Tie”, released in January, this is one of the first new songs for 2013. Timberlake is dressed elegantly, dancing and singing this engaging song, that reminds us, although vaguely, of the sound and choreographies of the great king of pop, Michael Jackson.

Many remember Justin Timberlake as a teen singer of the 90’s, as a member of the boy band N’Sync and as the boyfriend of Britney Spears, but since he started his solo career, he has had a huge success, now known all over the world, not only as a singer, but also as an actor and television personality. In this music video for the song “Suit & Tie” Timberlake shows his more mature side, dressed elegantly in black and white, it’s almost like a scene of a movie with all the shadows and lights and he is the star of the scene, feeling the rythm of the music produced alongside the famous rapper and producer Jay Z.

Justin Timberlake‘s style is unique and elegant also outside the music video set of this new song “Suit & Tie”. Although he always dresses with style, he is known for some unconventional and original clothing choices, specially in his performances alongside other celebrities, such as Christina Aguilera, Janet Jackson or even the Rolling Stones. In this new song, both the lyrics and the scenery, alter a classic man’s look in an image of seduction, with passion and sex appeal.

What do you think about the song and the look?